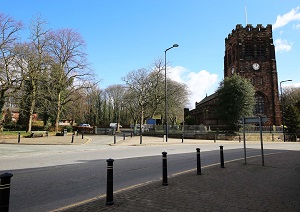 Newton-le-Willows, formerly Newton-in-Makerfield, is a market town situated on the outskirts of St Helens borough.  The town boarders Cheshire and due to this proximity maintains a Cheshire (WA12) postcode.

Situated midway (circa 15 miles)  between the major cities of Liverpool and Manchester,  4 miles from St Helens and 5 miles from Warrington .This location provides excellent motorway and public transport links with direct trains to London only taking 1hr 40 min from Warrington Bank Quay station.

Whilst located between large towns Newton-le-Willows has managed to retain its Market Town character, with plenty of Green space including a heritage trail and many independent retailers, pubs and restaurants.

There are a number of highly regarded junior schools, secondary schools and colleges in the area and a number of community events including a Town Show and Christmas fair.

Winwick village is on the outskirts of Warrington three miles north of the town centre, near Junction 22 of the M6 and Junction 9 of the M62, bordering Newton-le-Willows and Burtonwood.

For a small village it has a significant history King Oswald of Northumbria is believed to have been killed in the Winwick area with the parish church dedicated to him. Winwick was also the site of the Battle of Red Bank in the English Civil War on 19 August 1648, where Oliver Cromwell defeated a mainly Scottish royalist army.

Whilst conveniently located Winwick remains a small village within a rural location.

The rural village of Croft is on the northern edge of Warrington, situated close to the borders with Merseyside and Greater Manchester, neighbouring villages including Culcheth, Lowton, Winwick and Risely.

Croft has an abundance of green space and two churches, two primary schools, and a large playing field with children's play area (the village green).

Other facilities include a youth centre, horse riding, a golf range, a bowling green and a hairdresser. There is also a village shop next to the General Elliot pub, called Elliot's General Store.

Croft Carnival is an annual event, usually on the first Saturday of July, featuring a wealth of local talent, business and exhibitions. The event lasts the entire of the day, culminating with a friendly contested athletics competition at night, followed by the locally famous egg throwing competition.

Culcheth is a popular village in the borough of Warrington, located approximately 6 miles north-east of Warrington town centre.

Culcheth is a sought after area with many local amenities including a public library, a village hall, sports facilities, two supermarkets and a wide range of smaller shops clustered around its centre. With a large village green at its heart. Walks are to be found along the old railway line, now known as Culcheth Linear Park.

It has a number of restaurants, cafes, pubs and takeaways, making it a popuar local destination.

Haydock is situated in the Borough of St Helens, roughly mid-way between Liverpool and Manchester, with direct access to the A580 (East Lancashire Road) and intersection with the M6.

Probably best known as the home of Haydock Park Racecourse. Built in 1899 on 127 acres of land granted by Lord Newton, Haydock Park hosts a full season of race meetings and a few popular music events throughout year.

Historically Haydock was one of the UK’s richest coal and coal mining areas, with 13 working collieries. The last colliery in Haydock (Wood Pit) closed in 1971. Haydock is now home to a Country Park, known as the Lyme and Wood Pits Park.

Burtonwood is situated in the outermost suburbs of Warrington

The name Burtonwood is known worldwide as the location of the former RAF Station Burtonwood mainly used by the United States Air Force from 1942-1958, and was the biggest US airbase in Europe.

The village is also known for its brewery, which brewed the Burtonwood ales. The brewery was founded in 1867, and built up a large estate of pubs. In 1964 Burtonwood Breweries became a public company, but retained its head office in the village.

There are two recreational parks and two primary schools, Burtonwood Community Primary School and St Paul of the Cross Primary School. The village does not have a secondary school or college, however there are nearby secondary schools and colleges including Great Sankey High School, Hope Academy in nearby Newton-le-Willows, and Priestley Sixth Form College in Warrington town centre being the nearest specialised sixth form college

Burtonwood also has three nature reserves. Wheatacre Woods, the Old Colliery Moss and an area known as the Picnic Area.

Warrington is situated in Cheshire on the Banks of the River Mersey 18.5 miles east of Liverpool and 16 miles west of Manchester.

Listed in the 101 best places to live (2014) Warrington and Lymm were said to have transport connections second to none, being at the heart of the regions motorway network including M62, M6, M56, M57 and M58. This has been a key factor in the town becoming an important distribution hub for the northwest.

Public transport links include excellent access to the West Coast mainline with direct trains to London taking as little as 1:40mins, and journey times to both Manchester and Liverpool of 30 minutes.

With a population of circa 207,000 residences (2014) which is larger than many cities such as Chester, Oxford and Aberdeen.  Warrington has around 8,000 businesses employing 115,000 people.